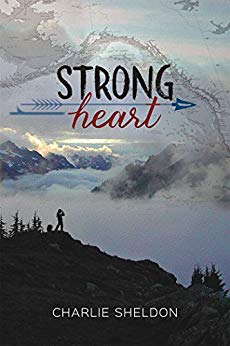 Tom and his two Native American friends are busy preparing for a hiking expedition into the mountains when Tom’s ex-wife arrives on the doorstep with a young girl of about 12 or 13.  It turns out that the girl, Sarah, is Tom’s hereto unknown granddaughter.  Not wanting to postpone the trip into the mountains, it’s decided by all the adults to take Sarah along for the ride, so to speak.

I enjoyed this story, even though the writing style is somewhat stilted and sentences are abruptly cut short.   Mr. Sheldon has extensive knowledge of the area where this book is set – Olympic Mountains/Pacific coast of Northern America.  He also has worked with Native Americans on fisheries issues, so I sense that he has insight into the conservation of marine resources as well as our human anthropological roots.

During the hike, Sarah goes missing and after a frantic search lasting over a week she eventually returns to the camp, alive but incoherent.  She eventually talks about her experiences while she was missing and it is this section that I found particularly interesting and compelling.  It is as if the writer switches personality, the writing flows and is rich in detail and atmosphere.

I gave this book a three out of four stars on Online Book Club, it could do with a bit more editing I thought and the ending was very abrupt.  I could see Sarah’s story being developed into a stand alone book on its own.

You can find the book over on Amazon here

My Amazon.uk review is here

Thanks for the lovely review, Janice. Confident Color is still available and I’ll be using it this week, along with Exploring Color Workshop, to teach a color workshop in Ohio

Thank you very much Janice for the positive review of Maggie of my Heart which you posted yesterday and coincidentally it was my birthday too!

Disclosure:  Some of the text or images on our website contain links to Amazon.co.uk.  By clicking through and purchasing an item from this link, we will earn a small commission.